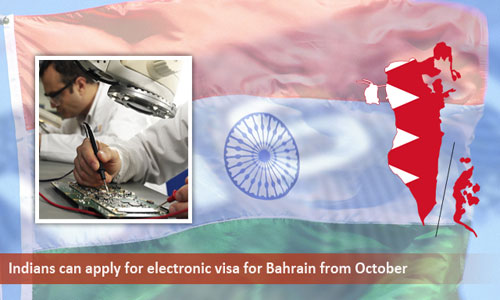 The Crown Prince of Bahrain, Salman bin Hamad bin Isa Al Khalifa, has announced new visa rules and regulations under which Indian nationals travelling to Bahrain will be permitted to apply for electronic visas, effective 1 October 2014.
According to a statement of Bahrain Economic Development Board (EDB), Indians will be able to obtain e-visas prior to travel to Bahrain via a simple online application process.
Under this new policy, India will be one among the 36 countries to benefit from the online e-visa facilities. Moreover, the validity period of the visa has been extended allowing Indian expatriates to transit to and fro the Gulf country easily for a longer period. Approximately 290,000 Indian expatriates residing in Bahrain will be benefited from this new policy.
Under the new visa system, the visa-on-arrival facilities have been extended to more 65 countries. Additionally, multiple entry visas will be made available along with extending the validity period for up to three months for those visas that are valid for one month. It is expected that, the new visa system will boost investment, tourism and business opportunities in the country.
The Minister of Transportation and acting Chief Executive of the Bahrain EDB, Kamal bin Ahmed, said that the new visa system will be one of the most convenient visa policies in the region allowing citizens from over 100 nations to benefit from easier and quicker access to the Middle East economy.
comments powered by Disqus

Overseas education has contributed A$1 billion to economy of...