Share
It hardly took 11 minutes for people to fill 27,000 spots on online application as the annual limit to bring parents/grandparents into the country.

There was a huge frustration added with fury in the people about an unfair system. IRCC opened the receiving of applications online regarding the form showing interest to sponsor family members in the Parent and Grandparent Program of 2019. At present, It is not open. Successful persons submitting the form will receive an email in 24 hours to confirm its receipt. 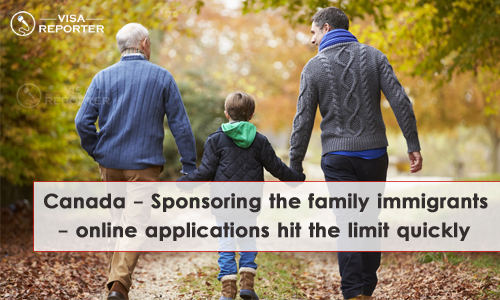 There were several angry complaints from the applicants, who said that the system to handle the online form shut down in a few minutes. The aim of uniting with families had ended abruptly.

Call for an audit

Additionally, there was a call of an independent audit of the sponsorship process. Canada had a lottery system in the past to reunite immigrants with their relatives.
Many persons had managed to load the form today, but within a short time, the application window was closed. They had a feeling of disappointment, and stress and were also heartbroken. They could not make headway to support their family. IRCC is presently adopting an approach based on the time of arrival of the applications in the 2019 Parent/Grandparent Sponsorship Program.

Immigration lawyers say that their offices are exploring the system glitch that prevented computers, applicants and IP addresses, from accessing the link, and uploading the form. Within minutes it was too late to do it. Some computers were able to access/submit the form, while many could not do so.

There is sufficient evidence to prove that the process was unfair procedurally. Furthermore, people are considering taking legal action against IRCC.
Mathieu Genest, a spokesman for Ahmed Hussen, the Immigration Minister said the initial analysis shows that there was no technical glitch. There was an understanding that many persons were not able to submit the form leading to disappointment.

More than 100,000 persons aimed to access the Interest to Sponsor Form. Family reunification was a pillar of the immigration policy. Additionally, the government increased the application intake from 5,000 to 20,000. The aim of creating an online system was also to ensure a fair process to safeguards and prevent abuse. The Liberal government removed the lottery system to reunite immigrant families and adopted a new approach now. The target in the family reunification program is admitting 20,500 parents and grandparents in 2019, and 21,000 in 2020.

Lessons from the past

This year, 27,000 could sign the interest to sponsor form online, considering for duplication/errors. Eligible sponsors also had to provide status proof and financial eligibility. In the lottery system of the past, there was an element of gambling with the life of the people. Furthermore, this process was unfair and has consistency with a pattern of failure of the government regarding immigration issues. It had also handled asylum seekers crossing from the U.S. outside official border-points in a bad manner.

Finally, the Parents and grandparents of PRs or citizens can also apply for a super visa. It permits them to extend a visit for two years after the initially entering the country. Moreover, there is an option of a 10-year visa for multiple-entries in which they can undertake several visits of six months at a single time.

Tech Nation Visa Scheme has made it easy for attracting non ...