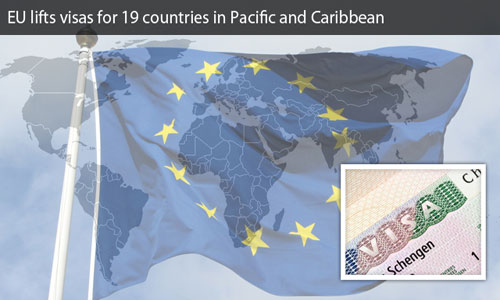 The European Union has removed the ‘entry-visa’ requirements to enter Europe for 19 countries in the Pacific and Caribbean zones, even as Turkey has been waiting for many years for being granted the same privilege. The EU took up or promulgated a regulation amending an earlier regulation which listed the third countries whose citizens must have proper and valid visas to enter the EU.
According to the amended regulation, citizens of some of the following nations/countries, Saint Lucia, Saint Vincent and the Grenadines, Colombia, Dominica, Grenada, Kiribati, the, Samoa, the Solomon Islands, Tonga, Trinidad and Tobago, and a few more are exempt from the entry-visa requirement when entering the Schengen zone.
But, this exemption will come into effect when bilateral agreements between the EU and the aforesaid countries are taken up and signed. This is so, as only these kinds of bilateral agreements will provide/establish/secure ‘full reciprocity‘, as per  a declaration issued by the EU council.
Actually, Turkey had signed a very important agreement with EU, which allowed the EU governments and countries to return those migrants from Turkey who enter EU illegally. This part of the agreement was to be reciprocated with talks that would enable visa-free travel for citizens of Turkey. Turkey is in fact a prospective member of the EU.
comments powered by Disqus