Indians and Chinese are outpacing Mexican immigration in the United States

Share
There is a big shift for the first time in the decades of United States history of immigration, Asian countries India and China beats the Latin American country Mexico to become top source for immigrants to the United States. 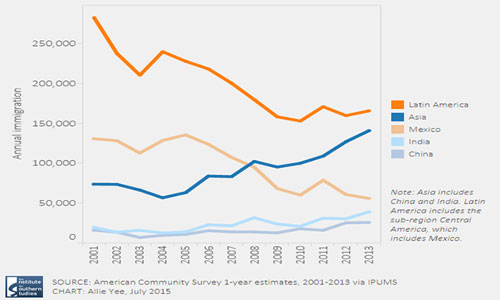 The states such as North Carolina, Virginia and Georgia have emerged as strong magnets pulling the overall Asian immigrants outpacing Latin American immigration. In 2013, Immigrants from India and China were also more than those from the state Mexico.
And the other southern states like Tennessee, Kentucky, South Carolina and Alabama have also become new destinations for immigrants.
For More Immigration News & Updates Follow Us @Facebook
comments powered by Disqus