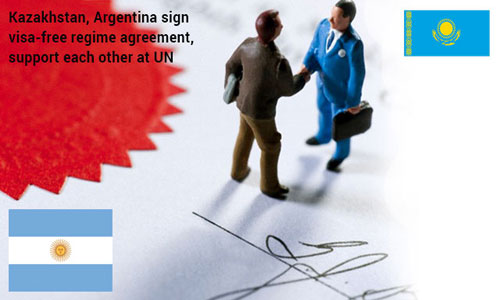 On 30 May 2014, the foreign ministers of Argentina and Kazakhstan signed a visa-free regime agreement in Astana with intent to ease travel for its citizens.

The agreement signed by the Erlan Idrissov, Kazakhstan’s Foreign Minister and Hector Timerman, Argentina’s Foreign Minister allows the citizens of both the nations to travel without a visa and is expected to strengthen the relationship between the two countries.

Idrissov stated that the Foreign Ministry of Kazakh will work proactively to set up a visa free regime with other countries of the world especially with Chile, a Latin American country. He stated that they are very delighted to admit their mutual support in UN agencies and he is thankful to Hector Timerman to have the support of Argentina for Kazakhstan’s candidacy for UN Security Council temporary membership in 2017-2018. He added that Argentina’s support is precious and both the nations’ intent to protect their common interests.

The ministers of two countries are interested to develop cooperation in the fields of investments, innovations, trade and agriculture. Idrissov has also proclaimed few plans to set up a mutual commission on economic, trade cooperation and also  the negotiations taking place on Argentina’s support of Kazakhstan’s joining  the WTO.