Share
Ontario and Quebec were the leading provinces to have employment gains in December. The latest Labor Force Survey of Statistics Canada revealed these facts.
57,000 more employees were employed in the private sector of Canada during December. There was an increase in food services, accommodation, construction, and other industries, had little change. 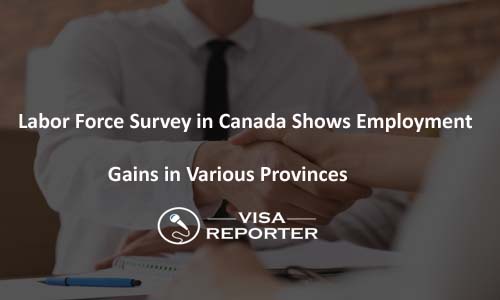 Employment increased by 25,000 in the accommodation plus food service industry, and there were gains in Quebec. In British Columbia and Ontario construction had an increase by adding 17,000 jobs.
From December 2018 to 2019, Canada employed 320,000 additional persons. In comparison Employment rates grew at a fast pace than in 2018. The growth extended across the first three quarters, in full-time work, with an increase of 283,000 workers.
Canada had a record low unemployment in this year touching at 5.4 percent in May.

25,000 more persons were employed in December in full-time work mostly in the construction and public administration. In Comparison December 2018, jobs in Ontario grew by 243,000 in full-time work, leading to filling up of 227,000 more positions. There were Increases in the services among the professional, technical, scientific and health care apart from social assistance.
Quebec
Quebec had an employment increase by 21,000. The unemployment rate declined by 0.3 percentage points and stood at 5.3 percent.
Yearly figures show that employment in Quebec increased by 63,000 and the growth was in full-time work.
Manitoba
The labor force in Manitoba added 2,800 more jobs. The gains were in part-time work for people in age group of 15 to 24 years. Unemployment declined by 0.6 percentage points and was at five percent between Nov and Dec 2019. Additionally, in Comparison to Dec 2018, the unemployment rate declined by one percent.
Prince Edward Island
Here 1,100 jobs were added in December. The unemployment rate did not change and stood at 7.9 percent.
There were 4,600 more jobs in the province principally in construction.
Nova Scotia
In 2019, employment grew by 6,700 here with leading gains in health care, manufacturing, and social assistance sectors. More than 50% of employment growth was among young persons. The unemployment rate was 7.9 percent in December.
New Brunswick
Here the increase was by 5,000 jobs in the year. A majority of employed persons were in the age group of 55 years and above. In December 2019, 25% of the provincial labor force was above the age of 55 years.
The employment growth was mainly in Construction and public administration. The rate of unemployment declined by 0.9 % and stood at 7.5 percent in 2019.
Newfoundland and Labrador
Here the yearly decline in employment was by 5,900 mostly in social assistance and health care.
The rate of unemployment of 11.8 percent in December 2019 was the same as compared to December 2018.
British Columbia
There was little change in 2019 in British Columbia. The unemployment rate was 4.8 percent.
Alberta
Employment was unchanged in Alberta on yearly basis. Less people worked full-time and more worked part-time. The unemployment rate grew by 0.6% and stood at seven percent in Dec 2019.
The employment level and the rate of unemployment were unchanged in the population range of 25 -54 years
Saskatchewan
Employment unchanged in Saskatchewan in 2019, and the Unemployment was at 5.7 percent.
We bring all the trending news and our patrons can contact us.
For More Immigration News & Updates Follow Us Facebook
comments powered by Disqus

Germany is obstructed by its cultural habit despite of flush...