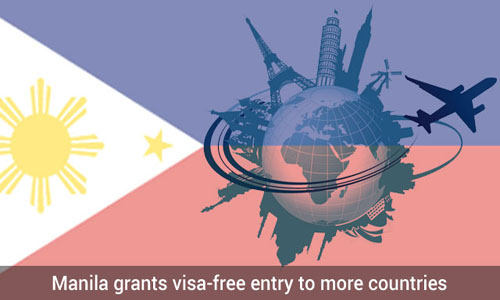 The Philippines government has made an announcement through an advisory issued by the Consulate General of Philippines in Dubai, granting visa-free travel for a 30-day stay to the citizens of seven more countries. These countries are the central Asian countires of , Turkmenistan, Kyrgyztan, Tajikistan,  and Uzbekistan, Kazakhstan the Central American country of Belize and Croatia in Central Europe.

This move has increased the number/count of countries in the present list from 150 countries to 157 countries. These visa-free entry privileges are being granted to these countries under the VWP, which is being put into effect jointly by the DFA (Department of Foreign Affairs) and BI (Bureau of Immigration) of Philippines.

As per the rules laid down in the Philippine Visa Waiver Programme (PVWP), nationals of those countries which maintain diplomatic relations with Philippines and those nationals not grouped under the ‘restricted category’ will be allowed entry to the country. The citizens of these above indicated countries have to simply present their individual passports which are valid for at least 6 months more than the intended stay and also a return ticket to the originating country or a ticket for a journey to an ongoing destination outside of Philippines.

Earlier, the visa-free travel facility was allowed only for 21 days for the nationals who comprised the PVWP (Philippine Visa Waiver Programme) list, but this has been extended to a 30-day period, to enhance and improve the prospects of tourism to the country.

An official statement of the DFA (Department of Foreign Affairs) stated that the inclusion of the seven countries in the visa-entry list is to promote tourism and enhance ties between Philippines and these seven central Asian countries.