UK student visas: call to ease norms after a decline in international students

Share
A major committee dealing with immigration just stopped short to recommend reviving of the post-study work visa. It was removed in 2012. The committee said that the government needs to ease visa requirements to a great extent.
Universities UK, a group which represents universities, expressed its disappointment that the MAC, did not urge for the reinstatement of post-study work visa. The opinion was regarding the facilitation of  work, for some period, after completing graduation, which is vital for deciding the place of study. 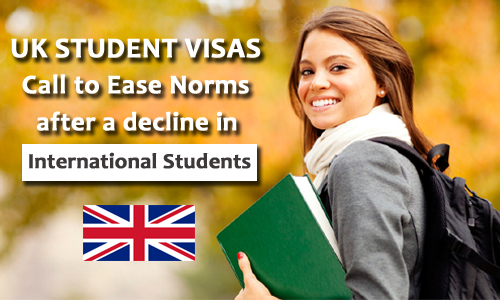 The report of the committee said that the estimate of contribution of overseas students to the economy was near 18 billion pounds in 2015. Moreover, there was no recommendation regarding any strict requirements in student visas.
Decline in Indians opting for UK
It also took note of the decline of the numbers among Indian students in the recent period. Moreover, there was an undesirable coverage regarding it in India. Closing this visa is a major reason for students of India  opting for other destinations. These allow working options enabling them to get sufficient experience and also recover costs. Furthermore, it heavily criticized the government regarding the absence of limit on the number of authentic international students.
Moreover, there is a difference of opinion in the thinking of the government and what the educational sector thinks. Presently, it is hard for the government and the sector to work in close cooperation as partners for increasing the strength of overseas students. Moreover, there is a need for an appropriate migration regime here.
The Committee recommendations
The Committee did not make a recommendation regarding the removal of overseas students from total migration numbers. Also it also made a recommendation, regarding extending the four-month after study period to six months for Master’s level students.
The British Chamber of Commerce was disappointed with these recommendations. The U.U.K. also regretted the stand of the panel for non-revival of this visa. An improved post-study visa can make the UK competitive, in the race with the USA, Australia and Canada. We at Visa Reporter will give all possible advice in this matter, to the Indian aspirants.
For More Immigration News & Updates Follow Us @Facebook
comments powered by Disqus