US migration policies to move in new direction: Tulsi Gabbard 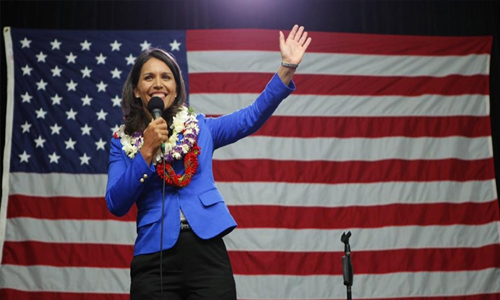 Indian citizens who are planning to relocate to United Sates can anticipate simpler migration procedures in the coming years, according to US politician and representative, Tulsi Gabbard. In the coming conference of the United States congress, few of the lawmakers of the country are about to put forth the bill on immigration.
She further stated the migration bill that has been passed in the previous year has faced few deadlocks and disputes, so their government is planning to remove all those problems and to take proper measures before proposing the migration bill.
One of the first Hindu women members of United States Congress, Tulsi Gabbard stated that Indian citizens’ community in America is participating actively in the updating process of the outdated migration policies.
On her 15 day visit to the country on the invitation of Prime Minister Narendra Modi, she has strongly noted about the Indo-American relations. She even pointed out about the Indo-United States friendship and the US president Barack Obama’s visit to India for the coming year’s Republic day.
Tulsi Gabbard has also added about the developments that are being undertaken in Gujarat.
For More Updates Follow Us @Facebook
comments powered by Disqus