Share
As per the new evidence the future of Canadian labor market is optimistic about a favorable outcome for newcomers. Also the underemployment among the Immigrants is a very old challenge for Canada, and now there is evidence contrasting the negativity on this subject.  Many immigrants work below the usual pay grade, and the recent report of the Royal Bank of Canada states that it costs the economy $50 billion annually in GDP, but the data is showing substantial progress in this matter. 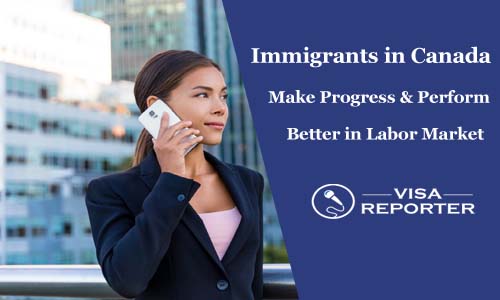 While assessing metrics regarding the labor force of immigrants many things are occurring like more immigrants present in the labor market getting employed, lesser cases of underemployment, and increase in their wages.
Also, for the core-age workers between 25-54 years in age, the rate of participation for newcomers in Canada staying for five years was 78 percent in 2018. This was 74 percent in 2006.
The fact is that newcomers now are integrating in the labor market quickly in comparison to their predecessors. The rate of employment of newcomers in the share of workers group with a job improved to 71.3 percent during 2018 but it was 65.2 percent in 2006.
Also the rate of employment of Immigrants in Canada staying between 5-10 years increased to 79.5 percent during 2018 but it was 75.6 percent in 2006.

Additionally there was a decline in the unemployment rate of workers group looking for a job. For the newcomers, it was 8.6 percent in 2018, showing an improvement over 2008-09 at 14.7 per cent and 11.5 percent in 2006.
Additionally there was a decline in the immigrant groups at 5.3 percent in 2018 for such immigrants who stayed in Canada for 5-10 years. It was 7.3 percent in 2006.
Moreover, the wages of Immigrant are increasing. Immigrants arriving in Canada in 2015 had earning of top entry wages of any group admitted after 1981.
For immigrants in core-age group and having a university degree the wage increase was 3.5 percent in 2017 and the Canadian-born group had an increase of 0.9 percent.

The better performance among immigrants is due to the tightening of labor market. The baby boomers are retiring, and employers count on immigrants for filling the gap. A study shows that 9.2 million baby boomers are scheduled for retiring in ten years time, and employers will rely heavily on immigrants.
The second major factor is Reforms related to selection policies in Canadian immigration policy. There are more efforts for supporting settlement and integration of newcomers.
Launch of Expression of interest system by the federal government and provinces in Canada is contributing for a better immigrant outcome. The human capital factors like work experience, age, education, and language proficiency, get preference.
The immigrants in past were selected at a point threshold, but now the things are better.

The role of Provincial Nominee Programs

Provincial Nominee Programs in Canada are contributing in improvement. IRCC notes that a majority of arrivals in PNP get established economically, have a good employment rates, and earn more in time.
Many temporary residents transition to permanent residents in Express Entry and the PNP migration. The immigrants previously working or studying in Canada have advantage of large earnings over others.

The governments at all levels are funding settlement support for immigrants and providing employment services, and language training. IRCC has increased the budget of annual settlement five times in the past twenty years to $1.5 billion. This investment is a major contributing factor for the improvement in labor market s. Immigrants do better owing to retirements of staff and refinement in immigration policy. These factors are optimistic indicators for immigrants in the labor market.
We bring all the reports and surveys and our patrons can contact us.
For More Immigration News & Updates Follow Us Facebook
comments powered by Disqus