Venezuela is going through an extreme phase of the economic crisis and is on the verge of shutting down, forcing its citizens to move to other South American countries for survival. Colombia is one of the most developed countries in South America has to bear the maximum number of illegal immigrants, who traveled around the country’s 2,000 odd km border and entered it without having to face immigration authorities who wouldn’t let them enter. 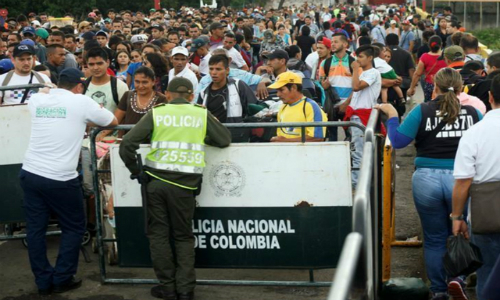 The Colombian government asked undocumented Venezuelans to register themselves at immigration authorities if they want to stay in the country. Officials have promised that they are taking the count for humanitarian purposes including healthcare, housing, schooling, and other departments and will not deport anyone. According to the current statistics, more than 203,989 undocumented Venezuelans have registered themselves. Those who haven’t registered have a month more for doing so, as it will help the Colombian government to prepare better. According to the government, there are more than 500,000 undocumented Venezuelans currently living in Colombia, and around 230,000 have crossed the country to seek asylum somewhere else.

Colombia currently has 320,000 Venezuelans living in the country legally either using a tourist visa or visa extensions for a minimum of six months. The government wants to design a humanitarian policy without their financial constraints to improve the lives of those stranded unemployed with nowhere to go.

Why are Venezuelans leaving the country?

Venezuela’s former president, Hugo Chavez and current president, Nicolas Maduro did a lot of wrong things because of which the national economy crashed. Fearing that they would be left jobless and without any money, Venezuelans decided to illegally travel to nearby countries, hoping to start a new life. According to sources, more than four million people have left Venezuela, but Maduro has denied the claims.