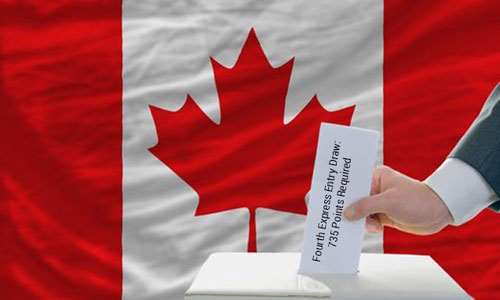 The Citizenship and Immigration Canada has successfully completed the fourth phase of draws for selecting eligible candidates from the Express Entry Pool. In the latest round, the number of eligible applicants has essentially raised to 1,187. However, when it came to the Comprehensive Ranking System, the minimum scores to be obtained remained high at 735.
In order to score such high marks on the CRS, an individual must possess either a Job Offer with a LMIA or a Provincial Nomination. Only then will such applicants be sent an invitation to apply. These invitations were issued during the period starting from 27 February, 2015 and ending on 28 February, 2015. Such invitations can now apply for Canada Permanent Residence.
Earlier on, the third draw of the Express Entry, selected 849 eligible candidates under the Canadian Experience Class. The CRS score required at this time was 808. This shows an increase in the number of invitations sent during the fourth draw, while decreasing the CRS score requirement. During the month of February alone, three draws were made from the Express Entry Pool, which is a good sign.
For More Updates Follow Us @Facebook
comments powered by Disqus