High officials of the UK and Nigeria meet to discuss issues such as immigration, trade, etc. 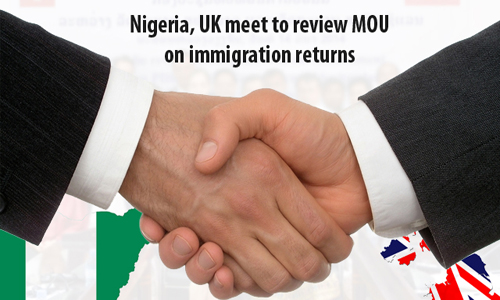 The United Kingdom and Nigeria met in Abuja, on 30Th April, Wednesday, for a relook and review of the MOU (Memorandum of Understanding) on migration related matters (specifically ‘immigration returns’) and other issues. The formal meeting was held between Uhomoibhi Martin, Permanent Secretary, Ministry of Foreign Affairs and Hugh Ind, Director of Compliance, assisted by many officials .
Some of the main issues that were discussed included transfer of persons who were given sentences, UK visas for Nigerian nationals, collaboration/cooperation on the return of those Nigerians living in Nigeria illegally, collaboration/cooperation on issues related to trafficking, etc.
Mr. Martin, the UK minister, in his opening remarks stated that the UK side believed that the previous meeting was a success. He elaborated that high hopes were placed on the latest meeting as/since the last meeting was such a success, and there was a lot of forward movement. He stated that while issues which can be easily resolved can and should be worked on, other issues which are more knotty can be pursued within a broad framework and through regular monitoring and assessment/reevaluation.
He added that the latest meeting would allow the two countries to take up a full-scale review of how the earlier agreement framework had worked. He also added that he expected and anticipated that the environment of understanding and trust would continue in this second meeting as well.
The minister added that immigration had become a global issue and also it ought to be pursued under a broader framework of the global MOU on immigration and trade, which was already in place.
comments powered by Disqus