Share
Canadian Prime Minister Trudeau named Marco Mendicino as the Minister of Immigration, Citizenship and Refugees. He is of Italian descent and is just 46 years in age with a background of law and worked for a decade as the Federal Prosecutor.  He will implement the immigration policies as per the promises of the Liberal Party led by Trudeau. 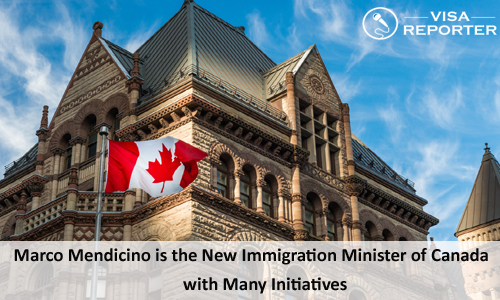 The Liberals are in a minority and their government, must rely on the votes of opposition for implementing the plans regarding raising immigration levels, creating the Municipal Nominee Program, as well as waiving the citizenship fees. Also there is a proposal to give permanency to the Atlantic Immigration Pilot.
Plan to have 350,000 immigrants in two years
In the past four years the Liberals had increased the annual levels of immigration from 260,000 to 330,800 during 2019. The target is 350,000 for 2021. A million newcomers are expected to arrive in the subsequent three years. The Liberals emphasized on refugees and the intake was increased to 15 percent, and also reduced the intake in economic class to 58 percent. The Family class levels were untouched.

The Liberals also made a promise regarding implementing the program connecting immigrants with the rural areas in the country. This Program would attract 5,000 spaces for immigrants.

This Pilot Program has an aim of curbing the decline in population of four Maritime Provinces. Also, it allows employers in Prince Edward Island, Newfoundland and Labrador, New Brunswick and Nova Scotia, in hiring overseas nationals for all jobs that they cannot fill up at the local level. It was extended for two years in May 2019 and Canada has a plan to make it permanent. In the past he was associated with many organizations and has also participated in Immigration Services. He intends to make a fine contribution in a great way for the country.
Mendicino replaces Ahmed Hussen who was associated dynamically with the IRCC from 2017.
We bring all the trending news and our patrons can contact us.
For More Immigration News & Updates Follow Us Facebook
comments powered by Disqus