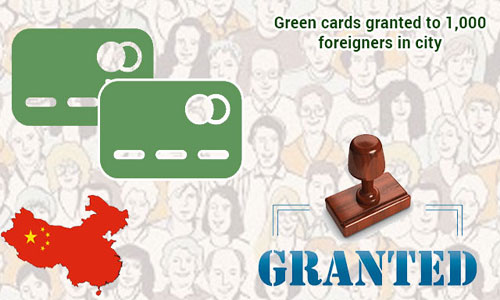 Shanghai Entry-Exit Administration has revealed that green cards or permanent residency is granted to more than 1,000 foreigners residing in Shanghai since the launch of the scheme 10 years ago.
Half of those who attained Green cards are foreign family members of Chinese nationals, who have children or partners in China. Around 20% of them are foreigners with work experience of over four years as managers or privileged talents in leading and high tech industries within the city.
Since the commencement of proposal in 2004, nearly 5,000 foreigners in China on whole acquired green cards from 91 nations and regions. Most of the green card applicants are from Australia, Japan, Germany, Canada, and United States.
Authorities of China are planning to revise rules on permanent residence for foreigners, through more flexible and realistic application standards.
Foreigners who have invested their amounts in china for a period of three consecutive years with a clean tax record are eligible to apply for green card or permanent residency. Overseas individuals who have held high level positions such as deputy directors, associate professors and deputy general managers for four successive years are also eligible to apply. As per the Shanghai Entry-Exit Administration nearly 100,000 expats are residing in Shanghai to study and work.
comments powered by Disqus