When the news was out that the United Kingdom government reached monthly tier 2 visa limit for the sixth time in a row, many assumed that the salary threshold will increase once again. Immigration experts believe that salary requirement for tier 2 visa certificate of sponsorship will rise once again. The UK Visas and Immigration department mentioned in its May 2018 report that non- EU workers must obtain a minimum of 51 points to be eligible for consideration. 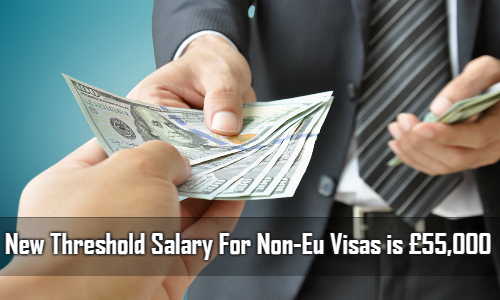 The count is more than double the minimum requirement of 21 points and five points higher than April 2018. When tier 2 visa monthly limit was hit for the first time in December 2017, employers have used increasingly creative and strategic methods to approach the issue. To get the 51 points, the non – EU worker should have a salary of at least 55,000 pounds. Jonathan Beech, managing director, Migrate UK, said that they have mad employers that wanted to fill job openings since 2016. This is a couple of million roles and isn’t only about lower-skilled workers.

However, there is definitely a drive for labor in the United Kingdom, but employers need a sponsorship license. He doesn’t think that minimum points criteria will drop anytime soon unless the cap is taken off or the policy is entirely reformed. Limit on tier 2 visa was purely created by demand and number applications. However, they’ve seen an increase in applications in certain sectors, and it could be an effect of Brexit. They’ve seen fewer European Union citizens apply for the jobs.

Anne Morris, principal, Davidson Morris solicitors, said that no one has control over the system. It isn’t based on business or industry because some sectors are very hurt because of it. A recently conducted survey in which Britons participated revealed that more 37 percent people said there shouldn’t be a cap on doctors.