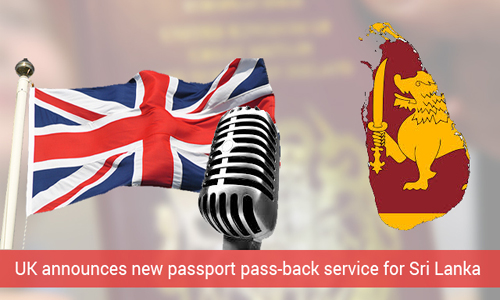 In a major relief to many frequent travelers in Sri Lanka, the British High Commission has announced the passport pass-back service, which would come into force on 11th August. The commission, in its press released, has mentioned that this service would be applicable for UK visa applicants who apply for a visa at Colombo centre.

The commission has also mentioned that people who have already applied for a visa before August 11 will not be eligible for this exemption.

It may be noted that passport pass-back is a customized service wherein the visa applicants will be allowed to retain passport when they apply for visa.

This service is particularly useful for high-end business entrepreneurs and frequent travelers who shuttle between countries for different purposes.

The applicant, however, needs to mention valid reason as to why he/she has to avail this service. Further such individual is required to pay a sum of Rs. 9,400 at the visa application centre, which is non-refundable.

Speaking more on the same, the British High Commissioner to Sri Lanka, John Rankin has said that the passport pass-back service would be welcomed by frequent travelers.