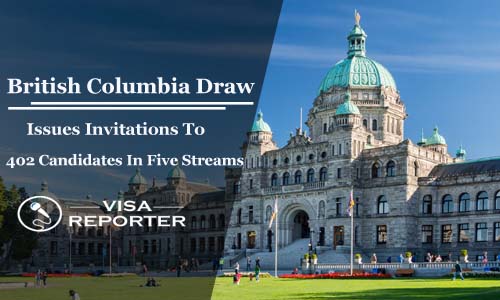 On Oct 1st British Columbia immigration has invited 402 aspirants in the recent draw for its Provincial Nominee Program across five streams.
In  direct provincial stream for skilled workers the score was 92 points,  against 97 for the skilled worker stream in Express Entry.
In the direct provincial stream for international graduates, the score was 97 points, against 101 points specific to the international graduate stream in Express Entry. In the semi-skilled/entry-level stream the score was 78 points.

Also in the past immigration draw there was a focus on the 29 target occupations. In the draw held on Sep 24th 65 invitations were issued in four PNP   streams and the  Minimum score here was 90 for all streams Skilled Workers and International Graduates

There is an extension of BC PNP Tech Pilot  to 2020 after it was initially launched in 2017. It presently holds the list of 29 occupations to target and also features relaxed requirements of duration. Also in it the draws  aim and attract technology workers because there is a progressive technology industry with a few big names associated with the province.
Tech Pilot Job Requirements of BC PNP
• A Job offer must in target occupations
• Job offer has to be for one year
• It should hold 120 days validity while applying
BC PNP Tech Pilot and its 29 Target Occupations

The PNP also informs the scores for immigrants to get the invitation for Canada immigration in the programs with graded scores for all basic level, global graduates and semi-skilled workers in Express Entry as well as provincial stream.

We bring all the recent information and you can contact us.