Many Canadians Agree that Immigration is Good for the Country

Share
In a recent Research survey, nearly half of the Canadian respondents agreed with the idea that immigration had a positive impact on Canada. 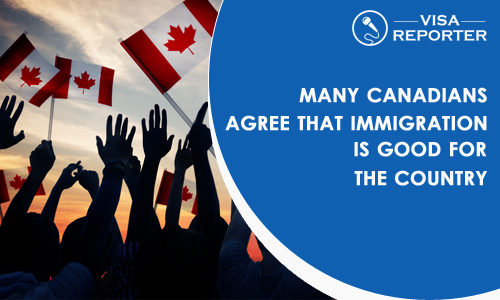 Moreover, many residents that think that Canada must reduce the intake of immigrants were in the provinces of Alberta, Quebec, and Ontario. The supporters of bringing down the numbers in immigrants were 40% and in the 35-54 year age group. Furthermore, 15% of respondents think that the intake of immigrants must keep increasing. 55% Canadians have an opinion that talent and hard work of immigrants make Canada a fine place to live. 69% respondents of this opinion were in the age group of 55 and over. Furthermore, half of the Canadians thought that Canada must permit only such immigrants who adopt Canadian values. 57% respondents of this opinion were men and had an age of 55 years and above (62%).

Canada has a tolerant society, having an environment suited to many cultures and is one of the finest places to settle. Finally, all interested patrons intending to migrate to Canada can contact us, for the correct guidance and support.
For More Immigration News & Updates Follow Us Facebook
comments powered by Disqus