Share
In 2019, Ontario has issued 7,391 nominations in its Ontario Immigrant Nominee Program as per an announcement. OINP had an initial allocation target standing 6,650, and in December 700 places were offered to it by IRCC. It included 41 nominations in favor of intermediate skilled temporary overseas workmen in the NOC initiative of the federal government. 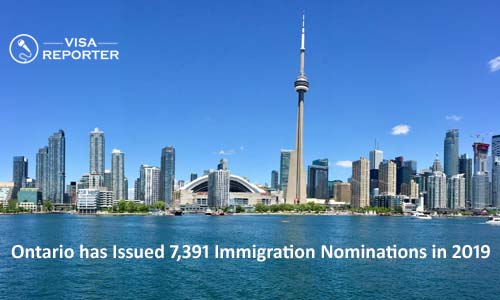 The Ontario Program reached its nomination allocation for 2019 and the notifying of successful applicants is in progress. Additionally, all new applications, and those applications already submitted to OINP will be accepted and later considered for the 2020 nomination allocation. Furthermore, the province has requested the federal government to make the allocation of provincial immigrants double each year. The allocation of Ontario Immigrant Nominee Program will be 13,300 in 2021.
Moreover, the province has also launched a new Regional Immigration Pilot with an aim of bringing additional skilled immigrants to small communities.
It has issued Notifications of Interest in favor of Express Entry candidates in three streams. These are:
• French Speaking Skilled Worker,
• Human Capital Priorities,
• Skilled Trades
Ontario announced about starting the Tech Draws in July, with a focus on these technology jobs:
• Software engineers and designers as per NOC 2173
• Interactive media developers and Computer programmers as per NOC 2174
• Computer engineers as per NOC 2147
• Database analysts and data administrators as per NOC 2172
• Web designers and developers as per NOC 2175
• Computer and information systems managers as per NOC 0213
These draws will also address the labor shortage in technology sectors of the province.
Candidates also have to meet present HCP requirements and have work experience in any of these occupations.
The OINP has a separate EOI system for the Entrepreneur stream, which issue NOIs.
Ontario NOIs during 2019
The five streams in which candidates can submit their applications directly for nomination are:
• Employer Job Offer in the three streams mentioned above
• International Student Masters stream
• Ph.D. Graduates stream
We bring all the trending news and our patrons can contact us.
For More Immigration News & Updates Follow Us Facebook
comments powered by Disqus