Share
An immigration white paper reveals a new scheme that allows migrants to continue to arrive in the United Kingdom. There were concerns that the end of freedom of movement will have an adverse impact on British business establishments.

The scheme will remain open for all EU states. Moreover, the workers will be free to live/work in Britain for one year. There is a stipulation that they have to leave for 12 months prior to reapplying. This document was published by Sajid Javid, the Home Secretary highlighting the new immigration policy after leaving the EU. 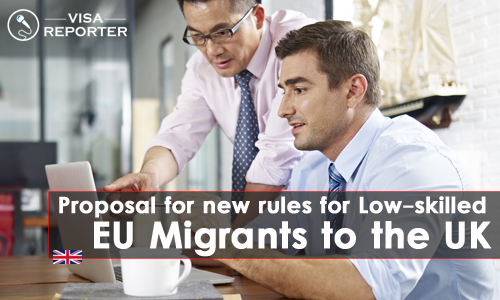 It will come into effect after the implementation period ends in December 2020. There will be a set of new rules to decrease net migration and reach sustainable levels.
Mr. Javid stated that there will be a new framework for migrants based on skills and not on nationality. It will also end the preferential treatment attached to the EU nationals.
An immigration bill will be put forward in the Parliament to bring major changes in the law.

The highlights are:
• Ending free movement,
• Protection of the rights of Irish nationals in the Kingdom,
• Presenting a new framework for the immigration policy
• Alignment of benefit rules after Britain’s exit
Also, there will be consultations whether skilled migrants should earn an amount exceeding £30,000 before qualifying for the right to work in the Kingdom.
The EU persons arriving in the UK will be free to visit for six months without needing the visa, but they will need an online document proving their right to travel.
Skilled workers need securing a job offer prior to arriving. Moreover, they must possess the qualification of A-Level.
There will be no limit on the people arriving in the UK using this route. There is consultation among the ministers for deciding whether they must earn an amount higher than £30,000 for applying.

Additionally, there will be a pilot scheme for ensuring that the agricultural sector does not suffer because of the tough rules, which permit it to hire low-skilled workers temporarily. It will be closed to other sectors.
Graduates will get six months to find work in the Kingdom after finishing their studies. The period for Ph.D. is one year.
A transition scheme allowing low-skilled migration will come up, and will be reviewed in 2025. The government plans to help businesses in finding alternative workers for replacing the EU workers.
There will be better measures for a transition of low-skilled workers. This will be open to nationals of countries having a low risk. It will also allow people to search for work for 12 months and not need having a job offer in hand or the sponsorship of an employer.

The persons arriving through this route cannot bring family members or avail the benefits.
Also, there will also be no cap on the number of skilled workers.
There will be a condition of earning more than £30,000 annually (depending on the consultation process).
Moreover, there will be a review of the average salaries and in case of it being lower than £30,000; the threshold will be low for some professions.
Home Office believes that the number of nationals from the EU arriving in this scheme will be similar to the present arrivals.
For More Immigration News & Updates Follow Us Facebook
comments powered by Disqus