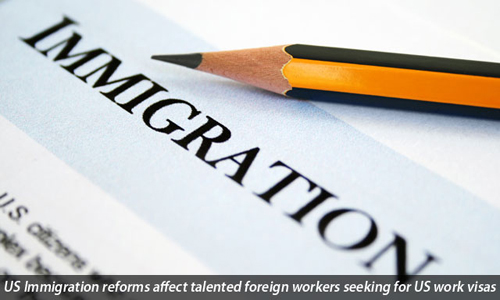 US President, Barack Obama, has pressed the House Republicans to pass the comprehensive bipartisan immigration reform. However, there is a continued delay regarding an agreement over the bill. As a result, many skilled workers willing to immigrate and the companies who are in need of their service are being affected.
There has been a decrease of 39% in the category of highly-skilled workers over the previous year. Employers are in need of talented foreign workers in the fields of science, engineering and technology, especially the foreigner workers who have pursued their education at reputed universities of US. However, these companies are disappointed because of the decrease in the number of foreign workers.
Beginning April 2014, the immigration officials have begun to accept applications for H-1B visas that have a maximum limit of 85,000 visas. By 10th April, 2014 around 172,500 applications had been filed.
This is the second time in succession that the applications have exceeded the maximum limits of visas. Executive Director at Partnership for a New American Economy, Jeremy Robbins, has told the media that because of the maximum limits placed on H-1B visas, the nation’s business and technology were being held back.
He expressed his concerns for the talented overseas students who have pursued their education at US universities, but are not able to continue to stay in the country because of visa caps.
comments powered by Disqus