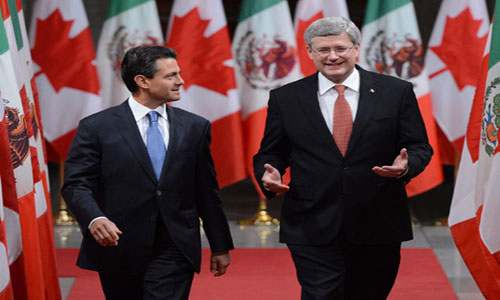 According to the latest news reports dated 18th February, 2014, the Canadian Prime Minister Mr. Stephen Harper and Mexican President Enrique Pena Nieto met at Mexico City, discussed various issues there and inked some agreements too. But, observers point out that the central issue of the ‘restrictions on granting visas’ that Canada imposes on Mexican citizens is a bone of contention between the two countries. As per these latest news reports, the agreements reached principally pertain to two main themes. One pertains to the integration of financial institutions of the two countries to further the cause of trade and foreign direct investment (Canada is Mexico’s second top destination for exports, the fourth largest investor in Mexico, and that the trade relationship is worth more than $35 billion a year). And, the second agreement pertains to facilitating greater access for Mexican airlines to Canadian cities and vice versa.
But, according to observers, it is unclear how the second agreement can bring in more Mexican nationals to Canada, even for short-term business trips, since Canada has imposed strict visa norms for Mexican nationals as a matter of policy. Also, it is relevant to point out here that until 2009, Canada was receiving more refugee claims from Mexico than from anywhere else in the world. But, further to that date (2009), since it (Mexico) was designated a ‘safe country of origin’, which means in general that nationals of such countries are rarely granted refugee status, the number of Mexicans entering Canada under both categories – refugee status or under some other valid visa status – has been even more greatly restricted by Canada.
But, the leaders and the agreements seemed to have sought to get around contentious points and issues such as the above, and seemed to have decided to move ahead on where there is mutual agreement. Thus, it is understood and expected that since Mexico has large reserves of Shale, it could explore possibilities of Canadian expertise being used to explore, exploit and tap it.
comments powered by Disqus