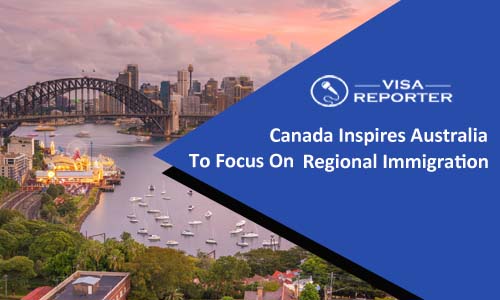 While there is no necessity for the latest newcomers to stay in the province that has chosen them, the proof is that the vast majority live in that province, he said in a Sydney summit on 23 Sept 2019.
In the sign up to the general election in May, the government aimed at migration levels as it promised to tackle the overcrowding in larger cities.
The government has decreased the yearly cap on permanent migrants from the previous 190,000 to 160,000 as well as proposing more incentives for international students and skilled workers to stay in Australian regional areas.

Before Canada revised its policy in the 1990s, only 10% of economic migrants lived outside the nation's major cities. This number has since grown to 34%.
In Australia, only 14% of the 1.4 million migrants who migrated to Australia within 2011 and 2016 settled outside of bigger capital cities.
Mr. Tudge places Canadian program's progress down to offering migrants a great welcome and assistance programs, a community network and support in finding work.
Canada presents an impressive case study in how immigration policy can perform a healthier distribution of population increase," he told. This program is one instance of a bottom-up strategy for migration.
Mr. Tudge is also studying at how European nations like Germany and France have practiced fast rail to join large capital cities to regional areas.
He advised people could reside in the Australian regions and catch the train into large cities for work every day. The federal government aspires to combine most of the satellite cities of Sydney, Melbourne, and Brisbane in 20 years.
A latest permanent visa pathway will come into force in November 2019, enabling skilled migrants who are enthusiastic to work in regional areas for minimum three years.
Please follow Visa Reporter to get all the trending Visa Updates and Immigration News. It will help you to keep updated with the latest information about Visas and helps to make your abroad dreams come true.
We bring all the latest updates and our patrons can contact us.
For More Immigration News & Updates Follow Us Facebook
comments powered by Disqus