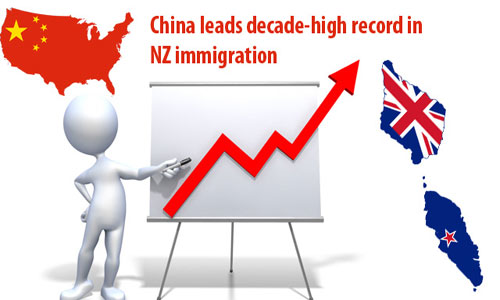 New Zealand government statistics agency has announced that it has seen the highest net gain in the number of immigrants, from over a decade that had ended by March this year, and the Chinese led the arrival rate.

In March, 2014, there were 3,800 more arrival of the migrants when compared to the departures in New Zealand. This is recorded as the second highest ever since February 2003 when 4,700 migrants were recorded.

The number of arrivals had been increasing since September 2012 mainly due to the reason that only few people of New Zealand have been migrating to Australia and more number of foreign nationals have been entering New Zealand.

Immigrant arrival rates had increased by 14 percent accounting  for 98,000 migrants and at the same time departures rate had come down by 21 percent accounting for 66, 100 , thus showing a net gain of 31,900 migrants. This has been the highest gain ever since January 2004 when 33,300 migrants were recorded. May, 2003 had the highest ever record of 42,500 in the net gain of the immigrants.