Share
There were some attempts to abuse the Tier 1 investor visa program and the decision of suspending the Tier 1 Investor visa scheme, received a small impact only. 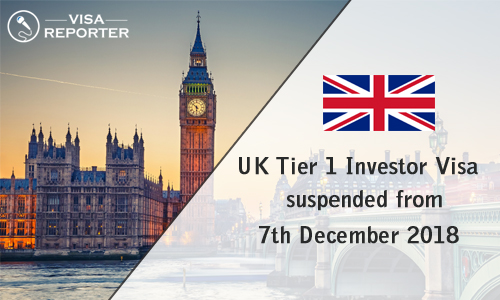 The response was low

Many investment companies opted not to continue with the scheme. There were other options worth looking like the Tier 1 Entrepreneur visa and the Tier 2 Sponsor License scheme.
Due to the Tier 1 Investor visa route was suspended from 7th December 2018.  Moreover, there were huge concerns regarding financial crimes and money laundering. Some criticism was also present that many people in it were uncertain regarding the source of their money.

There is a possibility that it will be revived in 2019.  There will heavy scrutiny in the future regarding the source of their money.  Earlier this year, the UK Home Office had a clampdown on the use of dirty money for funding investments.
Furthermore, there was a decline in Tier 1 visa services. Some of the wealth management firms scrapped these visa services because they were making little money from them.
The fund investment of the Tier 1 visa investor program was complex involving paperwork. There was a need of providing extensive evidence of possessing investment funds for the investor application. Additionally, there were extensive eligibility criteria for applicants.

The favourite of Russia and China

The origin of around 50% of Tier 1 investor applications was in China/Russia. These countries are often high-risk because there is a concern regarding the origin of investment funds and also a potential for money laundering. Most of the clients, and also the high net worth individuals, had to face a struggle for opening an account, and there were a few political issues also.
With the increase in the investment threshold to £2 million in Nov 2014 the access to the Tier 1 investor visa became tough for the Chinese because their government clamped down on money leaving China.

Some wealth firms were adopting the buy and hold approach, which had a low cost and a low-risk exposure. The companies opened accounts before completion of diligence checks. The possibility of failing in diligence checks, after opening a pre-account is minimal. The investor gets a Tier 1 visa for entering the Kingdom.
For More Immigration News & Updates Follow Us Facebook
comments powered by Disqus