Share
British Columbia invited 70 candidates in the initial BC PNP Tech Pilot draw for the present year on January 14th.  It issued invitations through four streams of the British Columbia Provincial Nominee Program as mentioned below: 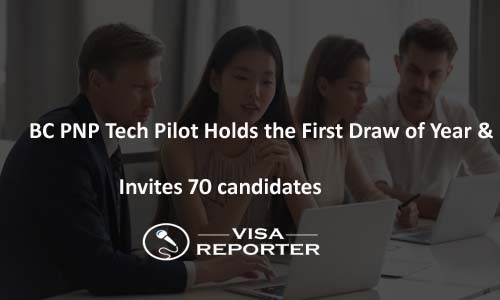 SI – Skilled Workers and also for International Graduates
EEBC – Skilled Workers and also for International Graduates
Also in the Tech Pilot, there are 29 targeted occupations that get a priority in processing for provincial immigration.
In the listed four streams, candidates had to score 90 points.
List of Candidates Invited on Jan 14th Draw
In the earlier draw, the province had issued 173 invitations to such candidates who had a minimum score between 85 and 110 points. The draw was held on Jan 7th and invited skilled workers plus the international graduates in five streams. Furthermore, the stream for entry-level/semi-skilled persons had a score of 85 points.
Skilled workers in the direct provincial stream needed 100 points, and in the Express Entry-linked stream needed 110 points. Finally, the direct international graduate stream needed 103 points 105 points were necessary for the Express Entry-linked stream.
List of Candidates Invited in 7th Jan Draw
This pilot launched in 2017 is extended into 2020 and has twenty nine target occupations plus the relaxed requirements in duration. These draws specifically aim at technology workers as there is a blooming technology industry in the province.

Requirements of a Tech Pilot Job:

This Job offer needs to be in one of the 29 target occupations
Its duration must be for one-year
Also it must hold the validity for 120 days at application time
The 29 Occupations in the BC PNP Tech Pilot are Telecommunication carriers’ managers, Computer and information systems managers, Managers dealing with publishing, motion pictures, broadcasting and performing arts, Civil,  Mechanical,  Electrical and electronics, Chemical and Computer engineers, Information systems analysts and consultants, Database analysts and data administrators, Computer programmers and interactive media developers, Software engineers and designers, Web designers and web developers, Biological technologists and technicians, Electrical and electronics engineering technologists and technicians, Electronic service technicians, Industrial instrument technicians and mechanics, Computer technicians, User support technicians, Information systems testers, Authors, writers, Editors, Translators, terminologists and interpreters, Broadcast and Audio/video recording technicians, technical and coordinating occupations in motion pictures, broadcasting and the performing arts, Graphic designers and illustrators, Technical sales specialists and wholesale traders
After obtaining the provincial nomination there is a guarantee of selection in the Express Entry  System, as 600 CRS points are added.
There is a score that immigrants must have to get the invitation for Canada immigration under the various programs. It is 30 points below for international graduates than the skilled worker in the Express Entry and also in the provincial stream. It is also lower for semi-skilled/entry-level workers,
BC PNP: Scores required for Guaranteed Invitation are 135 for Express Entry BC – Skilled Worker and Skills Immigration Skilled Workers plus 105 for EE International Graduate and Skills Immigration International Graduates. Finally it is 95 for Skills Immigration – Entry Level and Semi-Skilled workers
All the patrons desiring to know more about this can contact us. We will assist and support you in this matter.
We bring all the trending news and our patrons can contact us.
For More Immigration News & Updates Follow Us Facebook
comments powered by Disqus