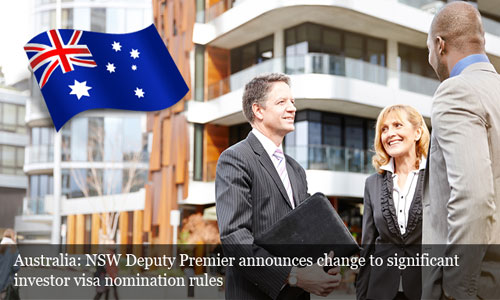 The Deputy Premier of New South Wales, Andrew Stoner, has made an announcement stating that applicants who are interested to acquire NSW nominations need not make an investment into NSW Waratah Bonds, effective 1 September 2014.
Significant Investor Visa (SIV) applicants need to acquire nomination from the government of state or territory of Australia before filing a visa application. Prior to this announcement, the Government of New South Wales required applicants to make an investment of minimum AUD 1.5 million dollars in Waratah Bonds that are issued by the Government of NSW. The investment must be made for at least four-year period, as part of their investment of AUD 5 million dollars.
It has to be mentioned here that the abolishing of this mandatory investment will create major benefits for SIV applicants and help NSW to strongly compete with other governments. Additionally, investors who wish to settle in NSW will be able to navigate easily from low-yield government bonds and achieve greater flexibility to choose their investments.
The change remains ineffective to those applicants who have acquired a nomination from the Government of NSW before 1 September 2014.
comments powered by Disqus

A policy to connect migrant engineers with the infrastructur...